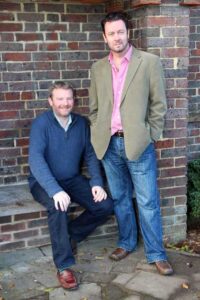 Vantage Publishing was set up in 2009 with the sole purpose of producing a brand new free community magazine for the Godalming area. Its founder, Stefan Reynolds, had the idea after being involved in a government sponsored market town appraisal, which had found that there was a need “to improve the availability of information to residents and visitors”. This confirmed his view that there was no easy way for local people to find out about all the community events taking place.

Having lived in the town since 1973 and with a background in publishing, Stefan decided to leave his job and embark on a new career in local magazine publishing. The first magazine was published in April 2009, delivered for free by the Royal Mail to 16,487 homes in the Godalming area, and was well received as it uniquely concentrated on the local area, with charity news, community and events information aw well as articles written by and for local people.

In July 2009, Marcus Atkins joined as a partner to look after the sales side of the business and in October 2009, a second magazine was launched covering the Farnham area, adding a further 21,331 local homes. A Haslemere edition followed in June 2010 followed by a Guildford issue in April 2011. Cranleigh was added to our Godalming issue in August 2011, bringing our circulation up to 79,362 – a near five-fold increase since 2009.

The biggest change happened in January 2014 when the magazines were re-branded and VantagePoint was launched. At that point, Midhurst and Petworth were added to the Haslemere issue and in April 2014 the Dorking issue was launched. In October 2016, East and West Horsley join the Guildford issue and Leatherhead added to the Dorking issue, taking the total circulation to more than 120,500 copies every month.

In addition, we have just over 19,000 e-newsletter subscribers and also promote our customers and community events via our various social media channels.

The company is based in Godalming, right in the middle of the VantagePoint circulation area, enabling it to easily interact with local businesses, charities and organisations.

It helps to be in the heart of the local community as this gives the business and staff a much better understanding of what goes on around them. All staff are based locally, many of them having lived in the area for more than 40 years.

Since starting in 2009, the ethos of the business has been to support everything local. Through the Jottings section, which appears in each magazine, well over 350 local charities, community groups, organisations and schools have their events promoted free of charge every month.

The majority of advertisers continue to be local, as are the contributors and writers. You might ask why they think ‘local’ is so important? One good reason why is a study by the New Economics Foundation in London which found that for every £10 spent at, say, a local food business, £25 is generated for the local economy, compared with £14 for each £10 spent at multinationals. Supporting a local business supports the local community.

VantagePoint are proud members of Surrey Hills Enterprises, their local Chambers of Commerce and media partners to a number of local organisations including the Surrey Hills Cow Parade, Guildford Fringe, Guildford Book Festival and the Godalming Run. We continue to work closely with Farnham and Godalming Town Councils, Mole Valley District Council, Surrey County Council, RHS Wisley and the local teams at the National Trust.

As the strapline says, VantagePoint really is ‘your best view of what’s going on locally’.

Get exclusive offers and more with our weekly e-newsletter. Sign up now!

VantagePoint Magazine
Heaven's Kitchen Mediterranean Steak House is now open to bookings! They are of course implementing all the Covid-19 guidelines.

We recommend getting your reservations in early to guarantee your table.
heavens-kitchen.uk - 01252 725532

Powered by WordPress | Designed by TieLabs
© Copyright 2020, All Rights Reserved