Walk east, past Ryka’s café, through the car park of the Burford Bridge Hotel and then a few yards along the A24 towards Dorking. Just past the roundabout take a path left, down into a field by the side of the River Mole. Walk around the edge of the field, by the river, to reach a footbridge. Cross and follow the path right to reach a T junction where you turn left and start to climb a hill. Ignore the first signpost pointing right. Instead, take the second path right, at the top of the first set of steps. The path climbs up some more and then strikes out east, along the flank of the slope. Keep going until reaching a five bar gate at a point where a path merges in from above left.

Go through the gate and immediately reach a T junction where you turn right and walk down only a few yards before breaking off left (unsigned) for 5 yards to reach a lane. Turn left and a signpost takes you uphill from the point where the lane dead-ends at a gate. The path then turns right and continues east, along the flank of the slope. Keep going until passing a bench with a view down over Brockham. Shortly afterward reach a T junction with a path coming down from the left. Turn left to take this path back (west) towards Box Hill. At one point you are forced left down some steps and then right to continue on.

Keep going, straight across at a cross paths with a wide track. Continue until, at a T junction, turning left to continue on in the same direction. Go through a gate and, a few yards further on, drop down left a few yards and turn right to continue on in a grassy open area but still parallel to the main path with which you eventually remerge.

Again continue on to pass the Box Hill viewing platform and later the grave of Major Peter Labilliere, who had himself buried upside down there in 1800. The track widens and takes you down a wide grassy slope. Just before three trees in the middle of the slope, turn left and walk down to the starting car park. You could use the cafe and/or toilets and/or picnic here. You could go on to the Stepping Stones public house in West Humble (see later) or the field by the Mole that you traversed earlier.

After lunch, from Ryka’s, again head towards Dorking as you did at the start of the morning walk but do not drop down left into the field. Instead walk on a few yards and go through an underpass to the other side of the A24. On the other side, turn left and quickly right, into West Humble Road. Walk up past the Stepping Stones pub to just beyond West Humble Station. Pick up the path going right from the right-hand side of the road just beyond the station and alongside Fanny Burney’s house. (Frances Burney (1752 – 1840), later, Madame d’Arblay, was an English novelist, diarist and playwright.) Enter a large field, staying on the right-hand side, and crossing a footbridge over the Mole. On reaching Swanworth Farm, take the path left and cross the Mole again. Continue on to a small field with an information plaque then swing right, onto a wide path running right and through a wood and eventually meeting an asphalted lane running uphill, left, towards Norbury Park House.

Follow this up to and then around the perimeter of the grounds of Norbury House, staying alongside its wooden fence. You will swing left and pass a sawmill. Follow the fence until it breaks off left and downhill. (At this point it is worth briefly diverting left to look at the view out over the valley and over Mickleham.) Continue on along the wide path until reaching a signpost saying “Druid’s Grove” and pointing down some steps to the left. Go down the steps to join a narrow footpath on which you head right. At a T junction with a wider path, go right and later take a left fork. At a T junction, go straight over and steeply down a lot of steps to emerge on the bank of the Mole. Follow the bank, right, to reach the field by Fanny Burney’s house. Cross to the far right corner and emerge by West Humble Station. Walk back to Ryka’s.

print
Previous Slow down for the scarecrows!
Next Soroptimist International Surrey Hills 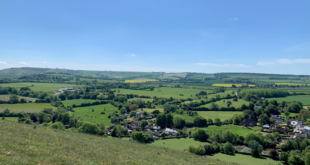 The majority of the route for this walk is along woodland paths and tracks. The …

Richard K Potter
MENTAL HEALTH and wellbeing will be an increasing priority in the years to come. With the limitations imposed by COVID-19, www.creativity4wellbeing.com can give people some great ideas to get started with their own creative/art ideas. The biggest hurdle for many is simply to begin, so do have a look. It is worth mentioning that journaling can also enhance our wellbeing and there is a journaling section on this free site as well. Creativity is one avenue; other pathways to wellbeing include mindfulness, meditation, tai chi, yoga, rambling, Rumba and conservation, for example. Perhaps it is time to rethink our habitual ways of thinking and being?

View on Facebook
Powered by WordPress | Designed by TieLabs
© Copyright 2020, All Rights Reserved