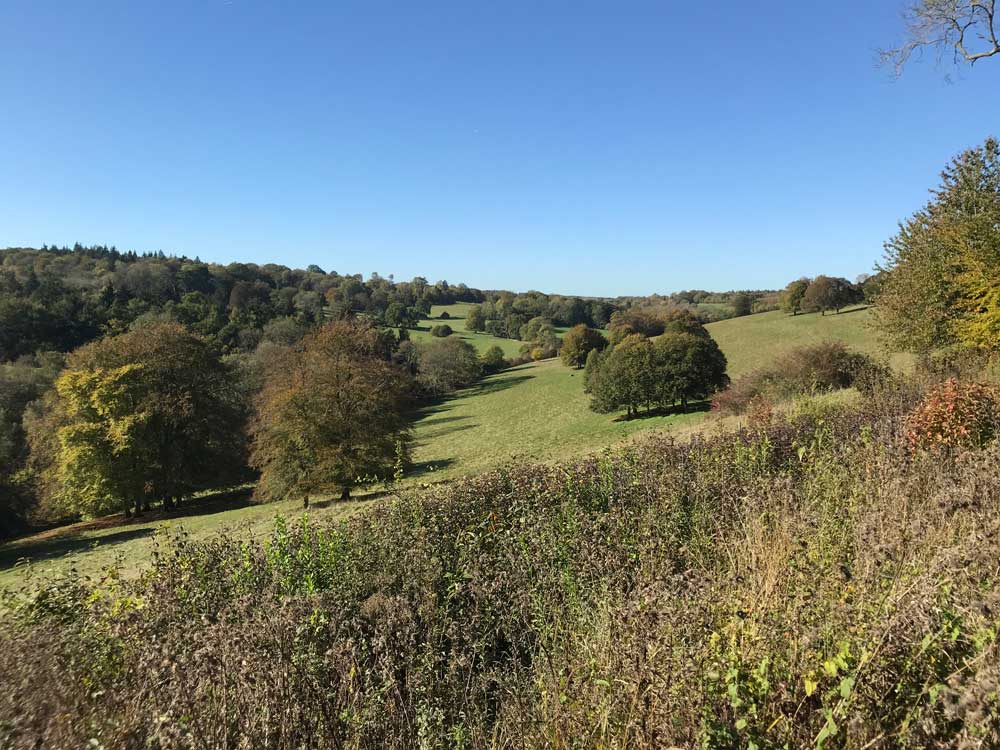 An undulating walk from Ranmore Common in the Surrey Hills, through part of the National Trust estate of Polesden Lacey. From the walk there are good views of the Mole Gap, London, and on a clear day, the South Downs. Please note that there is admission fee if you wish to enter the grounds or house of Polesden Lacey (free for National Trust members). This is a Surrey County Council Rights of Way Group Self Guided Walk and is reproduced with kind permission of Surrey County Council.

Go. From the Denbies Hillside car park, cross over Ranmore Common Road with care and then turn left along the wide grass verge. You will pass the red Charlotte Cottage to the left and then Rose Tree Cottage and the tile-clad Fox Cottages on the right. Immediately after Fox Cottages, turn right alongside a vehicle barrier onto the track into woodland (signed Youth Hostel). Ignore the first path forking immediately left, simply stay on the track alongside the cottage on the right. In 40m, at the fork, take the left branch signed again for the Youth Hostel.

1. Follow the woodland path which leads you steadily downhill for 1.1km. The woodland here is a mixture of oak, beech and yew. Young beech trees have been planted where the land slopes downhill and enters the Polesden Estate. The estate woodlands are managed to preserve their important landscape feature when viewed from the gardens of Polesden Lacey House. Eventually the track swings right to pass Tanners Hatch Youth Hostel on your left. Take a moment here to admire the youth hostel cottage and the valley beyond.

Tanners Hatch is an old estate cottage that was restored and renovated by members of the Youth Hostels Association during the Second World War. Across the valley the long wall of Sheridan’s Walk can be glimpsed through the trees. The playwright and politician Richard Brinsley Sheridan bought the Polesden Lacey Estate in 1797. He described the old house as a ruin and had ambitious plans to rebuild it, but did not achieve this. The only visible legacy of his ownership is this long terraced walk, which is still one of the most impressive features of the garden.

2. Continue to follow the track down to the bottom of the valley (ignoring a signed path through a gate to the left). Stay on the main track as it swings left heading uphill between lines of coppiced hedgerows. After 100m fork left (signed to Connicut Lane) and the path leads you under an ornamental stone bridge.

3. Beyond the bridge, continue on the main track still climbing (note: this stretch can be very muddy). Some way along, the view opens up back across the fields on the right to the Mole Gap. After about 1.2km you will reach a T-junction with the road, Polesden Road.

4. Cross over the road with care, go through the hedge gap opposite and then turn immediately left to follow the footpath running parallel with the road on the left. On a clear day, there are views of London to the right. At the end of the right-hand grass verge, you will reach the entrance drive for Polesden Lacey on the left.

At this point you can take a detour to visit the house and gardens should you wish. NT charges apply for non-members. To do so, turn left down the drive. Opening times are displayed by the memorial arch, which was designed by Sir Hugh Casson and built in 1958.

5. To continue the walk, ignore the fork for the entrance drive on the left, simply keep ahead on the track signed to several cottages and farms. After 140m, at a signed junction of paths, stay on the main track which swings left heading steadily uphill. Stay on the track to pass Home Farm House and then continue downhill to join a cutting which leads you under a thatched bridge.
The cutting was constructed in 1861 to allow vehicles to use this estate road without being seen from the gardens. The excavated material was used to make a causeway for the lane lined with yew trees which you will be joining shortly.

6. Pass under the second bridge and, where the tarmac track turns left, keep ahead along a track lined with yew trees (signed as a public bridleway). After 300m you will come to a staggered T-junction. Turn right heading uphill on the tarmac track, noting the views of the Mole Valley. You will come to Yew Tree Farm on the left. A few paces after Yew Tree Farm, keep left at the fork. Keep left again at the second fork, staying on the main track. Further along on the left, you will find a small rest area with a bench. Take a moment here to sit and admire the lovely view back towards Polesden Lacey.

The present house was designed by Thomas Cubitt as a Grecian villa, and built in 1824 by Joseph Bonsor. Several owners have since added to it. Bonsor planted many of the avenues and woods on the estate. The house became a focus of Edwardian society when the Honourable Mrs Ronald Greville lived there, and entertained the social and political leaders of the time. In 1923 the then Duke and Duchess of York, later King George VI and Queen Elizabeth, spent part of their honeymoon there. When Mrs Greville died in 1942 she bequeathed the estate to the National Trust as a memorial to her father.

Some way further up the hill you will come to a short waymarker post with blue and yellow arrows, marking a crossroads of paths.

7. Keep straight ahead on the main track and then ignore the next path signed left. About 50m later, fork right to join a bridleway marked with a blue arrow (not the blue NT arrow). Keep straight ahead across a stone vehicle track and continue along the bridleway through woods for 450m to reach a junction with the road. Cross the road with care and go along the track opposite (signed for the Ranmore Campsite). Pass the scout campsite on the left and continue downhill for 100m to reach a signed junction. Turn left here to join the North Downs Way (marked by an acorn symbol).

8. Keep ahead on this path, passing through a wooden staggered barrier, along the edge of Ranmore Common woodland. After 700m, at a staggered crossroads, go ahead through a kissing gate into Steer’s Field. Take the left-hand of the two paths ahead, heading for Ranmore Common’s St Barnabas Church spire, noting the view of Westcott to the right and Dorking ahead.

In 1850, the elaborate but now demolished Denbies house was designed and built by Thomas Cubitt, who was the well-known builder and architect of the oldest part of Polesden Lacey house. St Barnabas Church was built in 1859 near Denbies by Cubitt’s son George, later Lord Ashcombe. The National Trust acquired 99 hectares (245 acres) of the Denbies hillside in 1960 and manages it to conserve the chalk grassland.

Follow the path as it swings left and pass through the gate to reach the car park where the walk began. 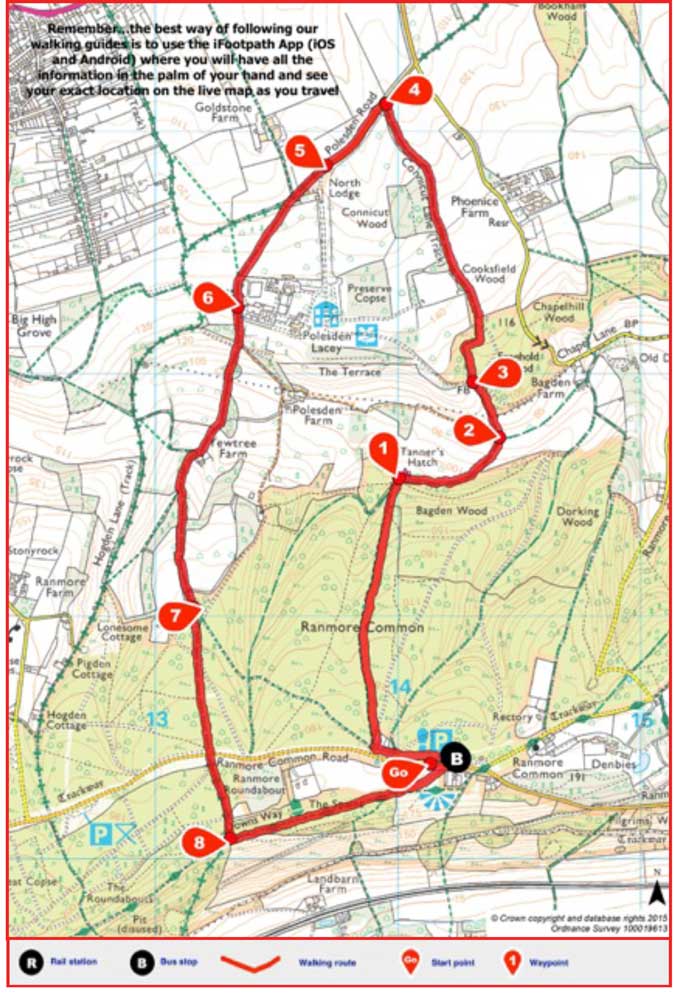 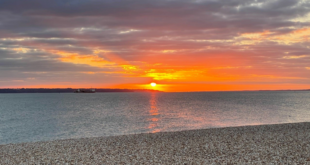 Weekend Walks: By the sea 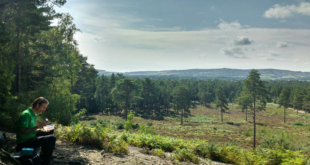 1. From the back left-hand side of the Iping and Stedham Commons car park, near …

VantagePoint Magazine
Model Trains in the Valley 2021- Cancelled is on our website. Please view it here: https://www.vantagepointmag.co.uk/jottings/model-trains-in-the-valley-2021-cancelled/!
View on Facebook

Powered by Convert Plus
Posting....