Weekend Walk: Puttenham and The Sands 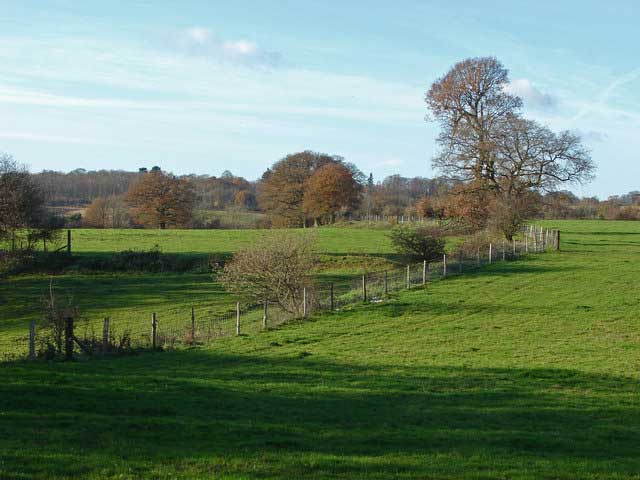 This walk takes you through woods and fields from Puttenham Common top car park to The Sands and, optionally, Charles Hill and back through the small hamlet of Gatwick. This walk has a few options within it which are described in the text and shown on the map below. The walk was submitted by Guildford Rambling Club (see guildfordramblingclub.org.uk).

Go north, out of the back left-hand corner of the car park, down a short railed path. At the bottom of the slope fork right to an immediate T-junction where you turn left, traverse an open area and enter trees heading roughly north. Ignore lefts and rights. The path swings west and then north again and goes down through silver birches. Ignore a right and keep straight on up a slope, ignoring a left fork. Join a wide track on the top near a bench. Go left and, at an unsigned marker post a few yards further on, go straight ahead past a blue arrow post then over a cross path and downhill, immediately forking left. Ignore a left and then fork right to follow a purple self-guided trail arrow, still heading north. Fork left at another purple arrow and arrive at a little car park and a lane at Totford Hatch.

On the lane go left and quickly right and around the side of Totford Lodge, following the North Downs Way. A path merges from the left and then you fork left (west). Cross a wide vehicle track and proceed through gates and across fields with a fine view of the Hogs Back to your right. You are then forced left and subsequently turn right to go around a house.Continue forward to reach Seale Road. Cross, turn right, and immediately turn left. Stay on the right-hand side of two fields then exit through a gate in the corner.

Follow on, reaching a road and you have two choices of route:

a) The first avoids the Barley Mow in The Sands. Turn left and walk down the road until you reach a warning signed sharp right-hand bend where you continue straight ahead on a path, jinking right and into a playing field. Turn left and walk along the edge of the field and out through trees to a road. Cross and go right onto the bridleway up the Long Hill track.

b) The second adds ¼ mile but takes you to the Barley Mow in The Sands. Cross the road and walk alongside Sands Golf Club’s course, eventually emerging on another road. Turn left and walk down to the T-junction by the club house. Turn left and walk along the road for about 750 yards to reach the Barley Mow. You could picnic in the playing field mentioned above. It is a little further along, on the other side of the road from the pub. (If it is too early to stop, the Donkey is about half an hour further on.) Continue on along the road past the pub for about 200 yards and turn right into the bridleway up the Long Hill track.

The bridleway enters the Crooksbury Conservation Area. Continue straight on, ignoring lefts and rights until, immediately before a house on the left you see a barrier, then again you have a choice of routes:

a) This is about a mile shorter and is prettier. Take the wide track left immediately before the barrier and the house and walk out across the common. At a T-junction by a little car park, turn right to reach a road. Jink right a few yards and cross to take a track out left. Follow this, straight over three cross paths. The path narrows for a while then widens. You can see a barrier a little way to your left and there is a road and a house 150 yards or so ahead (perhaps not easily seen through foliage). Here fork right and cross a broad track running east south east to take a path climbing up a short slope, roughly parallel to the road. Go over a cross paths and, at a T-junction, go left and down. Go over the next cross paths, following a green ‘self guided trail’ arrow (see a barn/shed off to your right along the cross track). Ignore a left. Reach and cross a road, again following a green arrow. Go straight over a cross track (see a large house off to the right) and reach a road opposite ‘Cutmill Platts’. (Here you could walk along the road to the right, into Gatwick to pick up the longer route below.)

Cross the road and take the signed footpath opposite, running along to the left of the house. Immediately fork right. The path brings you to a T-junction where you turn left then, after 20 yards, take a footpath right. You emerge at the end of a pretty lake, The Tarn. Follow the path along the end of the lake and round the corner to pass Cutmill House and emerge on a lane. Go right, walk around and up a slope to pass some garages and continue on into woods. Reach a road, go right, ignore a footpath right about 100 yards along and walk on to pass Rodsell Manor and, after the road’s dead end, Rose Cottage. Beyond this cottage, look for steps going up on the left-hand side of the path. These take you up and across Suffield Lane into the starting car park.

b) Continue straight on to pass two old houses and reach a road. Across the road and a few yards right is The Donkey. Just before the road, a path goes off to the left and climbs a little way. Picnic at the top of this climb or use The Donkey if this is to be your lunch stop. Afterwards, continue on this path, emerging on and continuing along a drive to exit through a ‘two eagle’ gate onto Seale Road. Go straight over and then on to reach another road. Again, straight over, heading towards Broomfield Cottage but then going left at a footpath into a field. Cross half-right to a gate and through a wood. Reach the road running through Gatwick. Go right to cross a stream and then follow a footpath out left, alongside a house. Reach a lane. Go left and the lane becomes a bridleway track. Ignore rights and lefts until yet another choice. Either:

i) After about 650 yards reach a blue arrow and a footpath left and walk to a road with Rodsell Manor just to your right. Turn right and proceed as above. This is about 1.25 miles shorter than the following section.

ii) After about 1100 yards, reach a cross paths with a red arrow pointing left. Go left and keep following this path until you reach Lydling Farm. Pass the farm and emerge on Hook Lane. Turn left and walk about 200 yards to take a path out left. Proceed for about 1100 yards, following yellow arrows, until, at a T-junction, follow a blue arrow left and, after 10 yards, a yellow arrow right, and up some steps. Emerge on Suffield Lane opposite the entrance to the starting car park.

Image: Fields to the west of Hook Lane between Puttenham and Shackleford © Alan Hunt 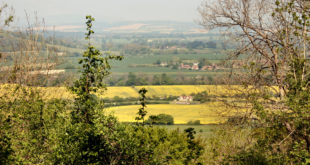 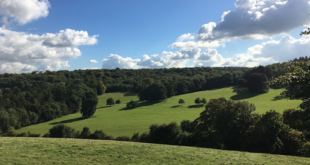 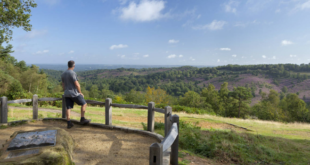 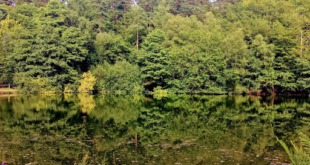 Get exclusive offers and more with our monthly e-newsletter. Sign up now!

Click on the edition above to view in full once it has been distributed. Back issues are also available – please click Local Editions then the area you want to see.

I am impressed by the range and number of local articles you include in Vantage Point. That aspect of the magazine appears to be growing, which is good. Makes it all the more worthwhile to receive … and read.

‘I have been advertising with VantagePoint for nearly 9 months and have found it really works. I have started to get calls about new jobs and work and often get referrals from these.  I would highly recommend this publication to small businesses wishing to get their name out there and raise their visibility locally’

‘We have been advertising with VantagePoint for 9 months and have renewed for 2020. The magazine has proved to help us reach a wider local audience and we have seen as a result of the offers and adverts more guests using the hotel, restaurant and bar.. The team at VantagePoint continually support all our events and I would highly recommend them to other local advertisers’

Many thanks to you and the team for the excellent profile slot  of our Society in the March Edition of VantagePoint. We are very grateful for the regular publicity for our monthly lectures which always results in a number of visitors. We are very hopeful that the in depth coverage of what our Society does and what we have to offer will result in a further surge of interest. We much appreciate the opportunity that you have given us. Thank you again and congratulations on the production of Vanta…

I have been advertising with Vantage Point for many years and always find the staff very friendly and helpful. They will tweek my artwork for free as many times as I need until I’m happy with the result. I have gained many clients through this advertising platform and even more enquiries.  The staff are always approachable and I get replies to my queries and emails almost immediately. If you’re thinking of advertising with VantagePoint – you can’t go far wrong with Marcus and Stefan.

“I’ve advertised in many magazines over the years but I never have had such a speedy take up when first advertising in a magazine as I have from advertising with VantagePoint. The results have been excellent.”

I’ve been meaning to message for ages! We’ve had the most amazing response thanks to your articles about us in Vantage Point. Lots and lots of new customers.  Thank you so much for helping us spread the word in such a wonderfully put publication.

A belated but nonetheless sincere thank you for advertising ‘Juliet, Naked’ for us for last Saturday.  Your introduction piece made all the difference – we had a great night and everyone went out very happy.   Nice way to finish up a successful season and we are extremely grateful for your support and encouragement throughout, you’ve helped us a lot.

I have only been advertising in VantagePoint for a few months and have really noticed the difference in the number of enquiries I have been receiving.  Several clients have started attending my classes as a result of featuring in the magazine.

I have been advertising in Vantage Point for a few months now and I have seen great results. The team are always really friendly. Highly recommend.